A quieter week with the pointy sticks

I’ve not been completely inactive in the woolly world in the last week.  I am trying to keep up with creating!  I made a cowl for myself (photo to follow later). ‘Another one?!’ my husband cried, ‘don’t you have loads of those things you wear round your neck?’ he of course meant cowls and scarves, though he sometimes applies the same thought to the buying of jewellery – if you’ve got some, why do you need some more?  I don’t agree with his sentiment for either woolly things or jewellery.

I also gave my sister her winter hat – her late Christmas present.

I had promised to knit something as an IOU as I ran out of time to complete things before 25th Dec.  Big, Chunky, Double strands of yarn, furry pom pom, what’s not to love, eh?  It meant we met before Christmas so she could choose from the choice of yarn snippets I offered, not knowing what the gift would be, then we met again so I could hand the gift over.  Twice we got to lunch together, which actually worked out a month apart – that’s also part of my new me/new year plans – to make a better effort at getting together with those that matter to me.

Using up my stash, more next time … 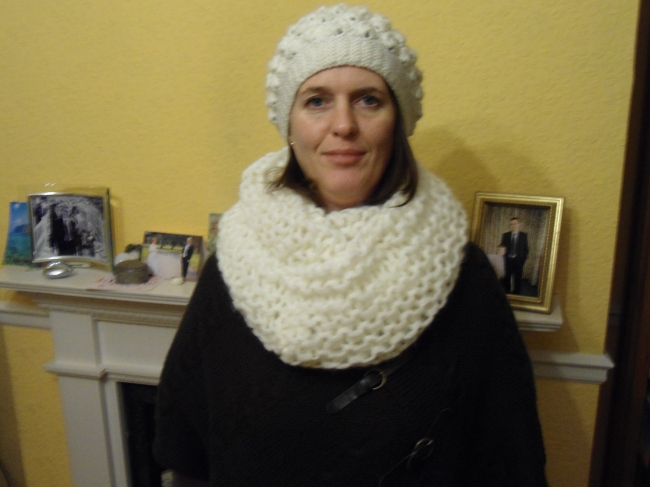 Last week – what a ‘mare’ !  It seemed every time I spoke to someone, turned on my social media pages or checked emails that there was some different disaster happening to a friend or family member!  I could only foresee 25th December looming without any kind of celebration and to tell the truth began shouldering everyone else’s issues as well as my own.

I joined a sewing group this year.  We were a bunch of ladies who met once a month for a coffee, show and tell, sometimes learning a new sewing skill.  It was all quite casual for members, although I imagine more difficult for the leader to co-ordinate everyone.  I helped post things on the social media page, keeping the ‘chat’ going when we weren’t together.  Then, suddenly last week, the group shut down – no warning, no conversation – and the members I know started contacting me and asking me why, bemoaning the lack of notice,  telling me of their disappointment – including the cancellation of a delicious afternoon tea we were to partake in next weekend in lieu of a Christmas night out.  I too was disappointed. I could not contact the leader easily.  In the end I had a rather blunt message, from which I sense it had all just become too much and the sewing group was something that ‘had to go’.  After just a day I decided that perhaps I should resurrect the group, in perhaps a different format – so (for my sins) I have started to sound out members about still meeting up. I am hoping it is not too much hard work for me!  It was something I was really enjoying, away from family ‘life’ and I met likeminded people there.

Secondly, work…… well, there was a Christmas Fayre planned in the street where I work.  I had been unable to work out what the boss wanted out of me towards this exactly.  It was planned in a matter of just a few weeks.  It was planned by my boss and a new member of staff who was given the task after one day of being employed. I am not sure the new colleague was able to present what she promised.  I do not think my boss realized how much work could be involved.  I felt usurped as a member of staff at times.  Still, it went ahead, it seemed a success, although I am happy it is over.  I went, I worked, the boss seemed happy.

Thirdly, work …… well, it should be the busiest time of the year.  It does not seem as busy as last year, sadly.  I attempt to increase sales with different marketing ideas.  Many of my ideas are not accepted.  I feel frustrated often.

Fourthly, if you are still reading this …… my husband had a complete meltdown in his job.  Early in the week a colleague upset him which resulted in a couple of tense emails between them – they sit practically side by side!  Later in the week, the same colleague and two of his staff hid a work problem and when hubby found out he went crazy – saying words not usually uttered in the workplace and leaving a meeting room in a rage.  My husband is a really honest and hardworking man.  He does not suffer fools, and has so much loyalty to his employers and his customers that sometimes work takes priority over us at home.  He has been there for 32 years.  After a little cooling down, all was well, but I have never heard him so disappointed with anything at work.

Last (well second to last) – Workman and DIY at home.  Having stuff done at home is always a little testy!  We are not natural do-it-yourself-ers.  New door in by workman, unfortunately not fitted quite right.  Fixing has been delayed (well, almost having to fight with them to come back actually!).  Door painted by husband – cold climate, paint not drying very fast at all – can you imagine another day with the cold from the outside coming inside and the knowledge that when the door eventually closes we shall have it stuck into the doorframe? …….

Finally, lovely husband remembered he used to enjoy making Saturday night dinner. He decided to make sushi for the very first time.  We waited with baited breath.  We heard cross words, some slamming about from the kitchen, stomping along the hallway …. and a sad face around the lounge door telling us it was a bit of a disaster and we might be having cheese on toast instead!  Luckily with a bit of help (mine!) it could be rescued.  Sushi tasted lovely, just maybe not quite as tightly rolled as shop- bought.  It hasn’t put him off luckily – just needs a lot more practice! I love the fact Saturday night dinners made by hubby may be resurrected!

With all this going on I did manage to do a few nice things, knitwise.  The picture is showing off a cowl made as a gift.  I did not finish the wrap I had promised myself but I know as it’s for me that I can wait.  I also started a new baby cardigan.  I have plans to sell some of my wares.  This is a trial piece, and one I started in a café where I sat and knitted in a corner quietly  It was at a pretty place in a little town called Chislehurst in Kent, UK.  It appears quite ‘chic’ with a few tables with white linen and china cups and things around the whole shop to look at and buy. It is quite ‘chic’, I guess! I am not sure what they thought of me knitting for half an hour but two members of staff came and asked me what I was making and either feigned interest or were genuine!

Back to the grindstone.

This entry was posted in Uncategorized and tagged Chislehurst, cowl, Knitted, meltdown, sewing.