A quick knit to encourage me with other projects and no more cake!

It’s been a while since I posted on here – oops!  There went one of my New Year Enthusiasms (remember the first weeks of January, having all those good intentions (resolutions) to have a better/more efficient year?!) I have been tied up with summer goings on and generally not very enthusiastic about crafting.  I did pick up a couple of WIPS but made mistakes so put them down again.  I took knitting to my weekly craft club (when not away on holiday), chatted, ate cake, knitted a few rows ….. then afterwards at home realised I’d knitted wrong, undid the rows again and bemoaned the fact I’d blown my sensible eating diet.  On reflection, I think I needed the company of friends rather than knitting time, obviously sometimes the two don’t mix! 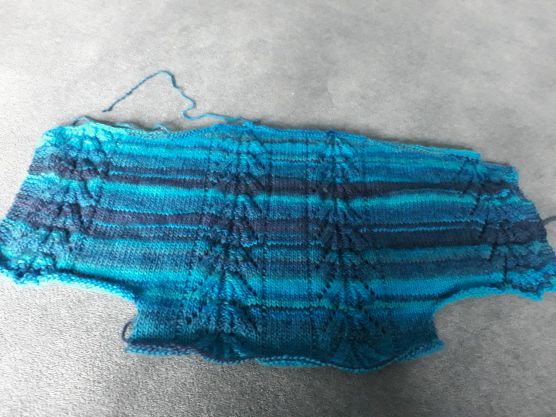 I have enough yarn to last me until I am about 120 years old, or so it seems.  I decided to root through my stash and cast on a chunky project with the idea that a quick knit might be finished speedily giving me so much satisfaction that I might want to pick up one or two WIPs and finish them too. I am a serial project starter.  I love the beginning of new projects!

I have also banned myself from eating cake again until (at least) this has been finished.  Two goals!  Watch this space …

This entry was posted in Uncategorized and tagged cake, knit, rico, WIPs.

4 thoughts on “A quick knit to encourage me with other projects and no more cake!”

I know but cake is so tasty!
Lovely bit of knitting you have going on there – I love the blue variegated yarn!

I have used 7mm needles to knit some sweater last winter so that I can see the progress quicker as well.
I am a bit more calmer now as my daily schedule is going back to normal so I have started to use 4mm needles to knit. See what will happen…

I think it works to occasionally try and do something on big needles – it satisfies me to actually finish something . I recently looked at patterns put by to make ‘one day’ and realised all the ones with needles less than 4mm will never be made!