It’s getting chillier and chillier in the S E of England. What an excuse to sit and knit – do I ever need an excuse?  Actually, no, knitting is like breathing to me.  Sadly, sometimes those ‘breaths’ are a little more successful than others.

For a new cowl I made this week I used Rico Creative Bonbon yarn.  I didn’t like working with it and I don’t actually love the cowl itself.  I am already thinking it will pill easily, a miff for yarn crafters!  I was playing with a scarf pattern which was supposed to be on smaller needles with skinnier yarn.  I knitted a short length with this super chunky yarn and sewed the ends together to get it over and done with.  The hat is made from DROPS Nepal – now, I love this yarn – but I hate the hat!  I fudged a hat pattern which should have used a different yarn gauge again, and made up a lot as I went along (ripping back and reknitting more than once). Together this pair of purply things look ok on the model head but this time the creations don’t make me smile widely. 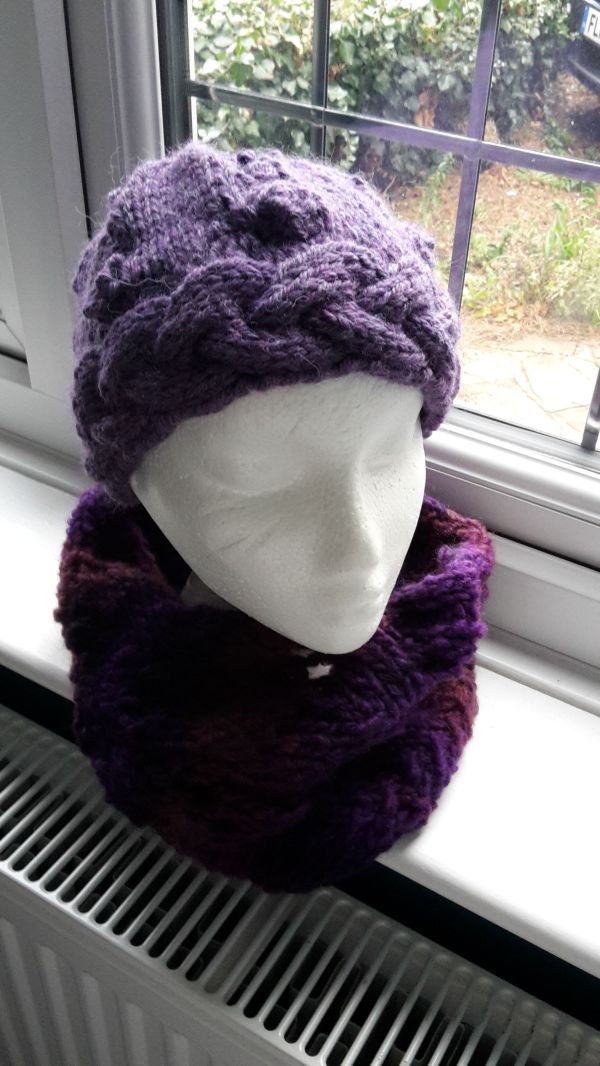 Talking of colours, purple in this case.  Have you ever looked at your stash of yarn and thought ‘hey, 50 shades of grey/purple/pink/fill in the blank’?  I guess I have a lot of purple in mine, perhaps not 50 shades but it’s a close thing between purple and green. What are your 50 shades?

Back to the two sticks now. Hopefully the next project is more of a success.  I am still working on several WIPS which I dip in and out of.  These two items were supposed to be quick knits (they were), to satisfy my soul with a start and a finish of something tangible.

This entry was posted in Uncategorized and tagged 50 shades of grey, crafters, DROPS, knit, rico, yarn.

One summer afternoon in 2014 whilst my husband and son went to a baseball match, I wandered about New York and found Purl Soho.  A kaleidoscope wall, A shop full of friendly fellow yarnaholics.  Bliss for me. So glad the boys were away so I could browse and purchase at leisure!

Hastings, The Longboat and The Pier

Yesterday we took a trip to the seaside.  It was chilly with blue skies, so wrapped up warm in a handknitted hat and scarf (of course!) we took a stroll along the prom before visiting family.  I am so lucky to have connections still to my home town.  For those who don’t know, Hastings is a town in East Sussex, on the South East Coast of the UK.  It is where William the Conqueror is commemorated for winning the Battle of Hastings in 1066 (though oddly enough it is little known that he technically won the battle in Battle, a village slightly inland!)

Here’s a snippet of what we saw!

The Landing is a sculpture rising out of the shingle, like a Norman longboat, erected to commemorate the 950th anniversary of the Battle of Hastings.

It is majestic and mystical, not enough has been said about such a wonderful piece of art.  It is about midway along the seafront, opposite Denmark Place. It is tasteful and accessible and I absolutely love it! 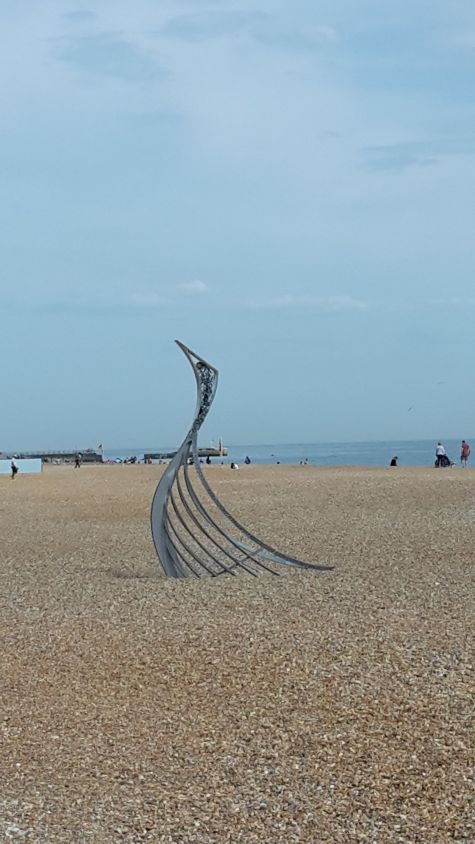 You can read more here, a snapshot of the original unveiling as reported in a local Hastings Newspaper last year.

If you are ever down that way go and take a peek.  And whilst you are there no visit would be without a visit to HASTINGS PIER. 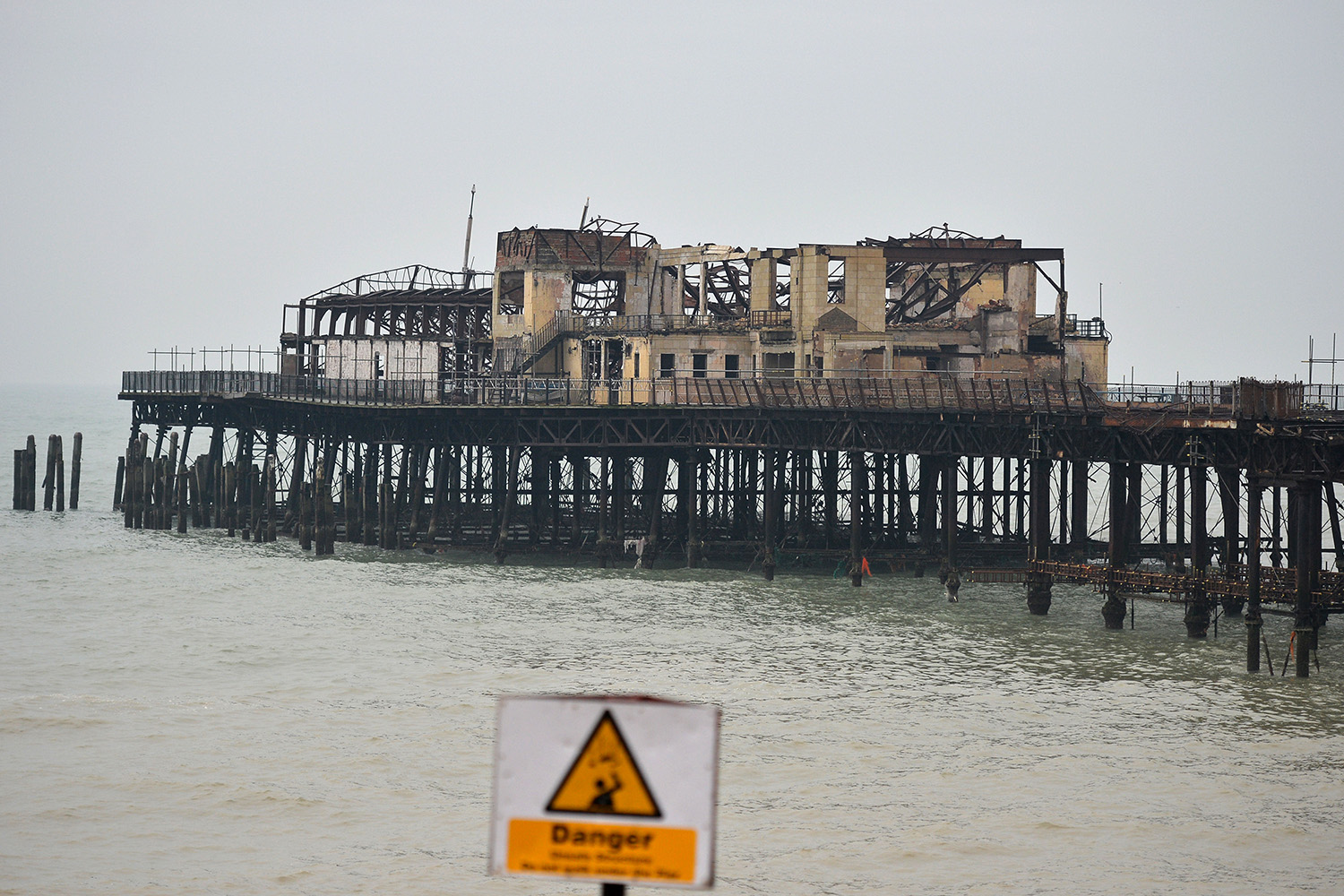 When the pier burned down in 2010 (suspected arson after a long battle to save a failing structure from the 1880’s)  I was so sad.  Now highly excited to see the rebuilt pier has won The Stirling Prize for Best New Building recently !!!  As reported in The Telegraph

*Pier photos not mine, taken from other online articles

One door closes and I shall wait for another to open whilst crafting a fair bit.

Today was the last day in my current job.  It was my choice to leave and several factors led to my resignation five weeks ago.  I know I am lucky, I have the support of my family, though I am not sure they understand my decision totally. I have been told not to be a stranger to the work colleagues I leave behind.  I believe it to be a genuine request.

What had changed? Me. My expectations.  My aspirations. I was flattered to have been offered the job.  I was returning to a company I had worked for before.  I already knew most of the people I would work with.

I shall take time to reflect.

I shall catch up with those I have neglected over recent months.

I shall keep my eyes open for opportunities.

Perhaps those little ideas that spin round inside my head may even come to fruition, be it money-making or otherwise!

I forgot to post a picture of the finished knitted baby hat made in in Sirdar DK speckle a couple of weeks ago.  To me it looks like a old fashioned pilot’s hat, thus the ‘chocks away’.  The pattern called for i-cords but I left them off as it’s a first size and I worry about ties tangling on new babies.  Not modelled on a baby makes the hat look a little lifeless so I hope you have vision! 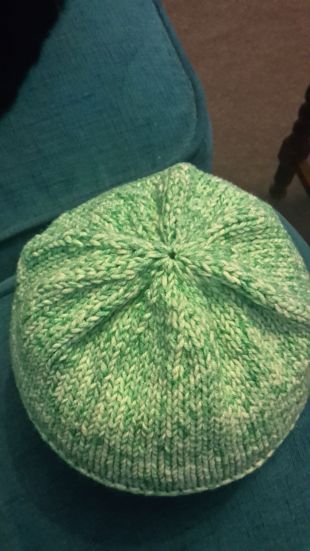 Yesterday, Saturday,  my weekly craft group took part in a Craft Fair in South London.  I wasn’t able to attend but some of my creations made it to the table courtesy of my fellow crafters.  (Last time I was there and helped promote our group on others’ behalfs.) A little snippet of what was of offer – ipad stands, vintage cotton reel keyrings, freehand embroidery pictures, felt mice, zentangle cards.  Creative Loops is our group name and there is such a variety of skills amongst us.  A couple of members are professionals and use their skills for their career, others are just hobbyists.

Today is a day of rest for me, apart from making a huge pot of vege soup and taking a stroll in the autumn sunshine I have done little.  There is still a pile of WIPs…

Mosaic Masterpieces in Barcelona, a patchwork of wonderfulness ! 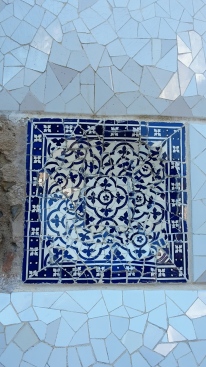 I feel like a jetsetter.  Visiting my son in Barcelona this weekend, I walked more than 30 miles, taking in the sights and sounds – a weekend just wasn’t long enough – there is so much to enjoy.  My fave part was a half day at Park Guell, high up above the City.  It’s not just a park with beautiful views, though that was amazing, particularly arriving almost at the highest part and looking out over town towards the sea. Zigzagging downhill between palm trees,

there was a band playing to the crowd,  wonderful architectural structures, then you come to the Gaudi buildings themselves! If you get a chance I’d really recommend a trip. 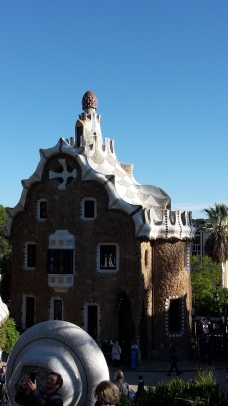 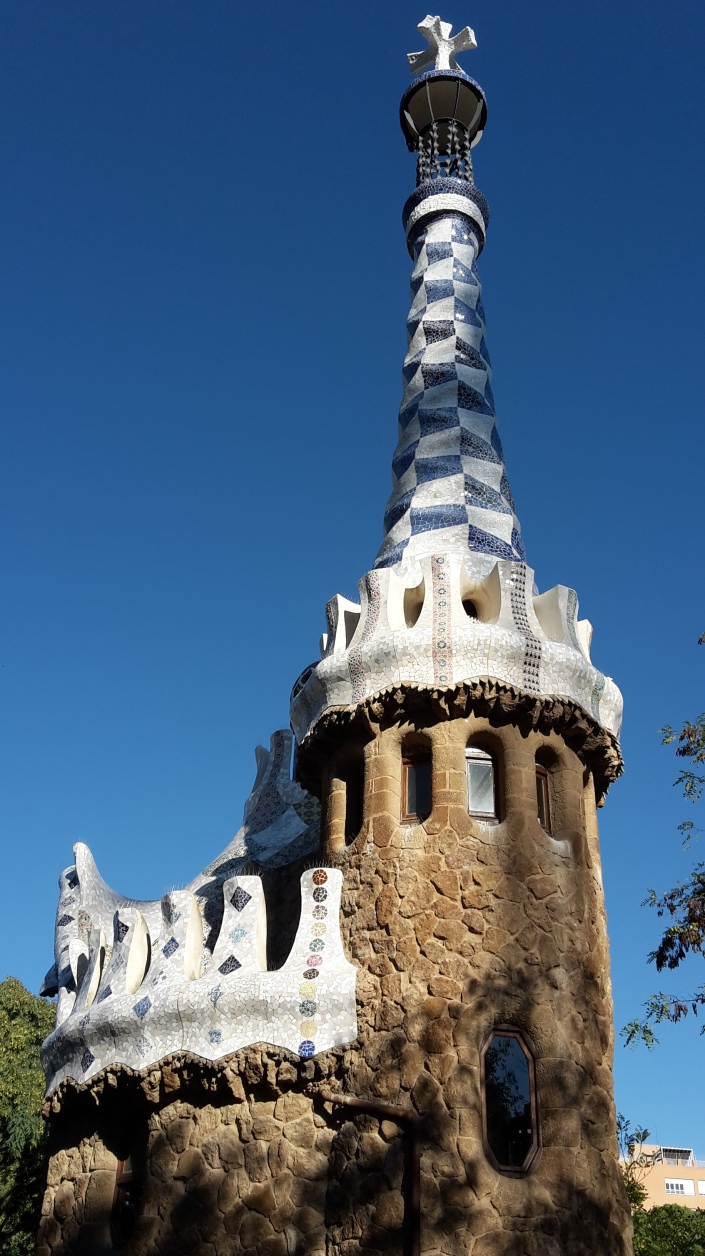 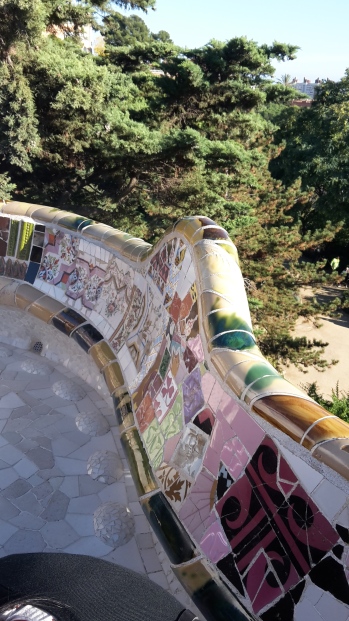 I can’t wait to go again. Today I am thinking patchwork, which could be seen as ‘mosaic’.  You cut and snip and then put it all back together again, sometimes a mismash but it works all the same!  Time for a little sewing I believe, though I could never match this fantastic style I can dream.

This entry was posted in Uncategorized and tagged barcelona, mosaic, patchwork.

At the end of the rainbows sits a girl knitting 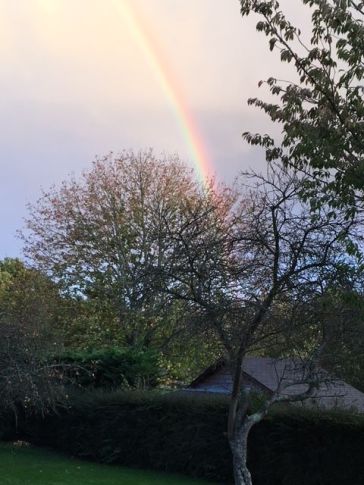 Autumn can bring wonderful sunny and crisp days. Today was one of those.  A brisk walk in the leaves and a Sunday roast in the pub was perfect (even more so after last night’s family party and rather a late night!)

It made me think of another weather wonder. On a recent trip to France we were lucky enough to see a whole handful of rainbows and the camera was to hand. The vibrant colours were amazing and we were only soaked once in the rain!

Meanwhile there’s been a little knitting this weekend.  Speckle project finished  – from a ball and a bit to a baby hat with ear flaps. Not much else went on!

This entry was posted in Uncategorized and tagged knit, rainbow.